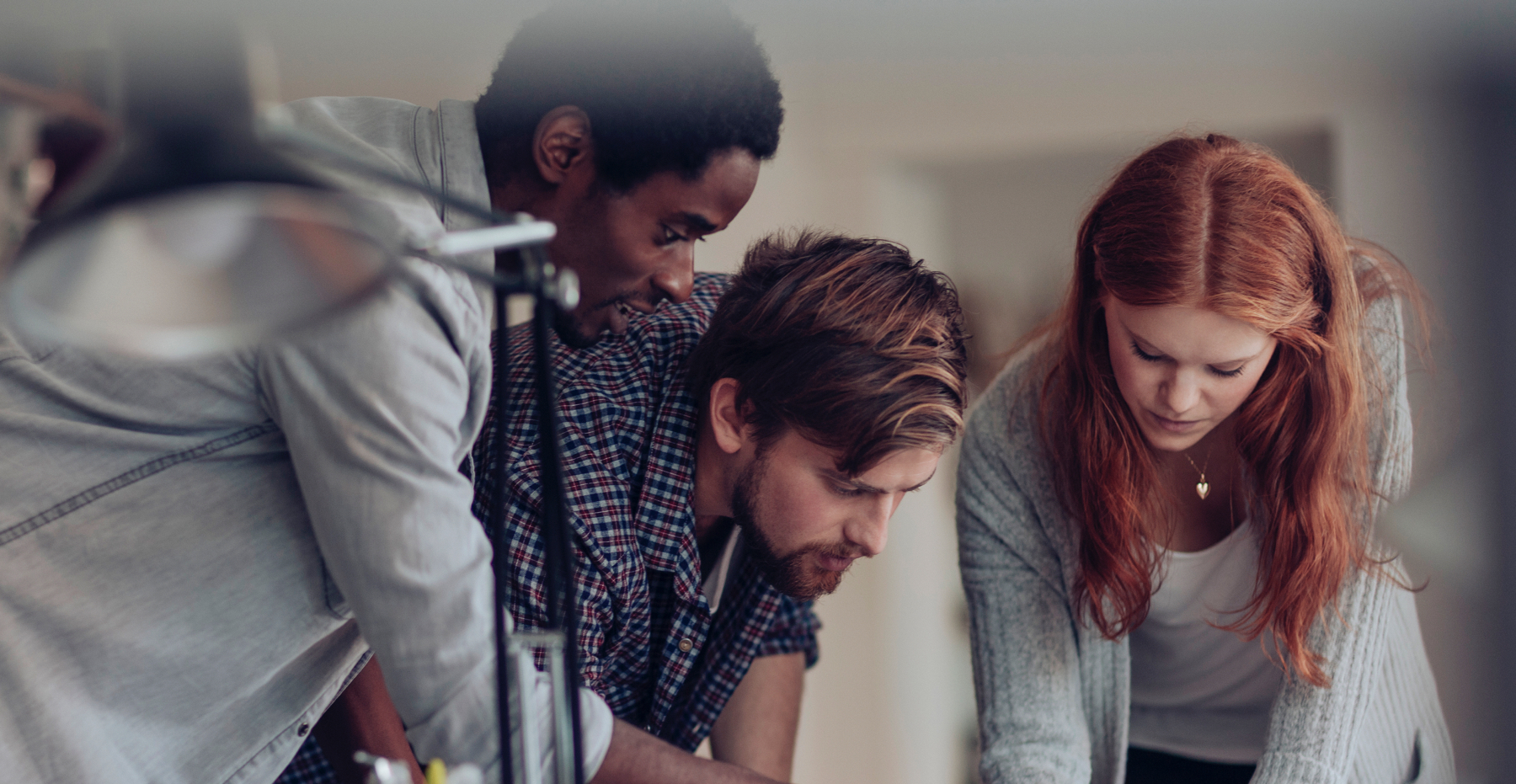 World-renowned turbidity expert Mike Sadar shares his views and experience with PMA on all things turbidity.

Mike Sadar with the PTV Series.

Mike, thank you very much for joining PMA at WWEM 2018. Let me start with your recent career, you joined Lovibond Tintometer approximately 5 years ago, how did that move come about as you’d been with your previous employer for quite a while hadn’t you?

Mike: Yes, I had been Principal Scientist at Hach for 25 years, working primarily on designing their turbidity instrumentation range but it had become a little less exciting than it used to be. I wasn’t looking for a new role per se but I was made aware that Lovibond were looking to set up an R&D team to develop their range of online instrumentation. I was invited to meet the owner of Lovibond, Cay Peter-Voss, who asked me if I’ve like to lead and develop my own R&D team.  After accepting, the first person I brought into the team was an electrical engineer who I had worked with during the development of the 2100 series and the 1720 series when he was Engineering Systems Director at Hach.  He left Hach to become R&D Director at In-Situ but came over to join me at Lovibond. Next, a world-class optical engineer left Hach o to joined us. He did all the optics for Hach’s instrumentation including their spectrophotometers as well as their turbidity instruments. We were all just looking for more fulfilling roles and Cay offered us the opportunity to do that. There are now seven us in the R&D team out in Colorado developing the next range of instrumentation for Lovibond.

How did you start about developing the PTV range of turbidity instruments for Lovibond?

Mike: The vision was to design an online turbidity instrument that could solve all the issues associated with existing turbidity instrumentation, namely stray light, condensation, microbubbles and ease of use, and by ease of use I mean both maintainability as well as making it easier for users to interact with the instrument.
We first started out the development by doing an assessment of all the turbidity instruments we could get our hands on, including some of the ones we had designed. We determined that many of them could be improved upon optically to reduce stray light which is very critical for the low-level turbidity measurement required in final drinking water monitoring. One of the default starting points for this instrument was there was going to be no glass cell in the PTV series because of this.
As well as having the aim of managing stray light better, we wanted to design an interface that made it easier for the user to achieve a high level of accuracy when calibrating to make the instrument the best instrument on the market in terms of performance even at really low turbidity levels. 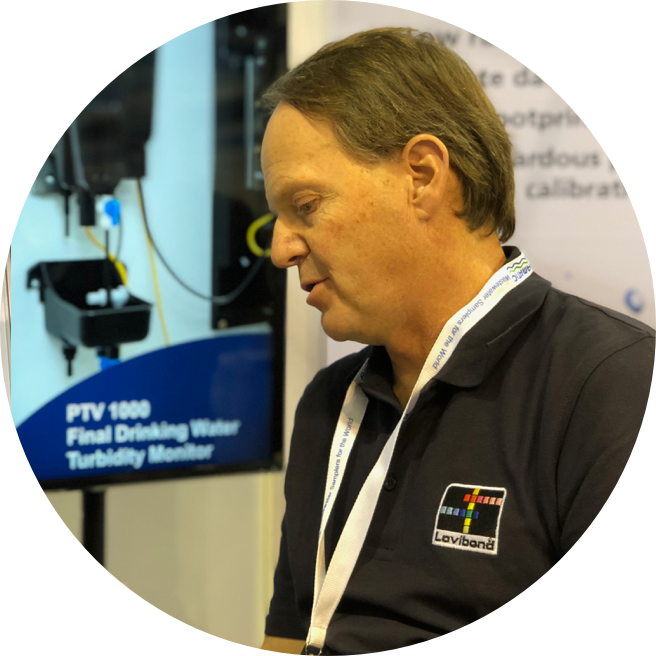 So, take me through some of the technical aspects of the PTV and let’s start with the light source options?

Mike: We have developed four different variants of the PTV series and the difference between them all is the light source used in each. The geometry of them is all the same, i.e. same detectors, same angle of measurement (90o) and the same measurement body.

The PTV1000 comes in two different forms, a US EPA 180.1 compliant version using a white light LED source and an ISO 7027 compliant version using a near infra-red light LED source at 860nm. There is also the PTV2000 which is a red light LED light source at 660nm and finally the PTV6000 which is a laser light source at 685nm.  The PTV1000 variants are purely driven by adherence to the international standard methods, US EPA 180.1 in the US and some other countries, and the ISO standard which tends to be more popular in Europe.

Many people wanted an incandescent white light source because that is what they have always used for turbidity measurement in the past, but they consume a lot of energy and are far less robust than LEDs so we decided we were going to use LED sources for both the white light and the ISO versions. They also have the advantage of being solid-state and you can do instantaneous feedback loops to compensate for them changing over time. As the EPA 180.1 regulation stipulates a incandescent white light source is to be used, in order to get the white light LED version EPA approved we had to do an equivalence study. As we were doing the white light version we also did equivalency studies on the two red light variants(thePTV2000 and PTV6000).

What is the benefit of using a red light source at approximately 660nm over the white light and the near infra-red ISO specified wavelength?

Mike: Really, it was driven by the US EPA who wanted to use better measurement technology. Red light sources are less prone to colour interference than white light sources. They also have very low stray light and you’re still monochromatic so you get very good intra-instrument performance. White light LEDs are a little more variable so you get differences between instruments and they also have a broader spectrum. In theory, shorter wavelengths are better at measuring smaller particles such as cryptosporidium which is the advantage over the ISO near infra-red measurement method.

The laser version was developed to take the red light version to the next level and really produce a highly collimated beam of light that is really good for very low-level turbidity detection, such as that required in membrane filtration water treatment. Laser versions give you a couple of extra orders of magnitude of resolution at the very bottom end of the turbidity scale. On the laser version of the PTV we have a parameter called the RSD (Relative Standard Deviation) which is designed to measure if you have even a pinprick of a breakthrough on the membrane. This was also present on the FilterTrak but the PTV algorithm is better. 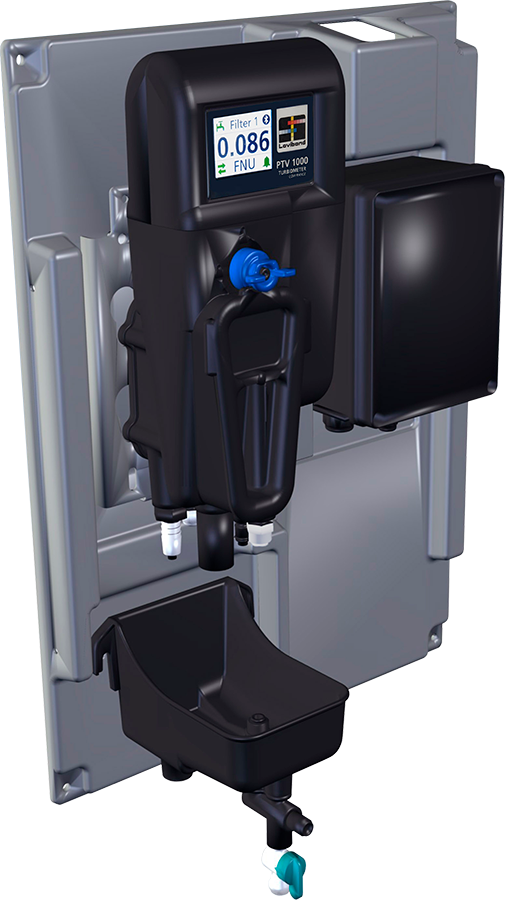 And how have you managed to reduce stray light with the PTV?

Mike: We’ve designed the measurement body to channel stray light down away from the detector and towards what we call a light dump. This is a specially designed part of the instrument in terms of its geometry and materials that absorbs almost all light rather than allowing it to bounce around the measurement body.

What about that measurement body, it’s a very small volume to reduce the flow requirement and provide a fast response time, why couldn’t you make it smaller?

Mike: Firstly, we needed to make sure an operator could get their hands in easy to clean it, remember the vision was to produce a turbidity instrument that was easier for operators to clean and maintain.  Additionally, a smaller body would have started to have an impact in terms of bubbles. We want to be able to measure turbidity at atmosphere by breaking the head of the water of the sample going to atmosphere. We did tests where we measured turbidity in the PTV with no flow and then quickly ramped it up to 500ml/min to test the ability of the instrument to measure that water accurately under different flow rates. No matter what the flow rate, the turbidity readings remained the same.

What are your views on formazin for use in calibration?

Mike: There has been a lot of discussion over the use of formazin in the water industry. Fundamentally, turbidity measurement is a relative optical measurement relating to the scattering of light by particles. Formazin was chosen as a calibration solution for turbidity measurement in the early 20th century precisely because it scatters light in a similar way to the particles readily found in water. Formazin was also chosen as it’s very easy to produce and a repeatable way. It’s an aldo condensation reaction between hydrazine sulphate and hexmethylenetriamine, where the hydrazine sulphate is the limiting factor. By the end of the reaction there should be no hydrazine sulphate remaining but there has been a lot of focus on it as a primary component in the production of formazin as it is classified as a carcinogen.

That said, we recognised the concern and every substance in chemistry should be treated as though it may be harmful at some point in the future so the Research Chemists at Lovibond have successfully improved the composition of the stabilised formazin we produce to further reduce the amount of potential harmful components. This means it can now be classified differently to other stabalised formazin solutions. Additionally, we’ve packaged our stabilised formazin in special bags which can be introduced to the instrument for primary calibration without the user coming into contact with it, these are called T Cal plus standards.

All other calibration solutions, for example polymer beads such as styrene divinyl benzene (SDVB) are a way of avoiding formazin and don’t scatter light in the same way as particles do in real world samples. When these standards are developed, they all still have to be traced back to the primary formazin standards.

Why is regular calibration with a primary standard important?

Mike: Well in the US, it’s a mandatory requirement that primary calibration of a turbidity instrument occurs quarterly. This is because it’s a whole system calibration as opposed to verification with a dry solid state standard and importantly it ensures the end user cleans the turbidity instrument. If you just use a dry verification standard then all you’re checking is that the optics (the light source and detector) haven’t drifted, by doing a primary calibration you’re checking the system as a whole and ensuring the measurement body isn’t fouled by biofilm or sedimentation. The US EPA really insist upon a primary calibration quarterly to ensure the user is cleaning out the measurement body and checking the system as a whole.

What about falling stream systems where the measurement body isn’t in contact with the sample?

Mike: The use of verification standards only for checking such systems has become popular over the years as a) falling stream systems don’t lend themselves to primary calibration and b) users have moved away from the use of wet standards for calibration.

What is the effect of black particles, such as powdered activated carbon, on a turbidity measurement?

Mike: Black particles absorb light so typically what you will see is they cause a negative interference. This typically manifests itself as a ‘noisy’response on laser based systems, with a white light or near infra-red light source you’ll see the response drop.  I’ve done a lot of experimentation with black particles and it’s a very difficult issue to try and overcome. If it’s just a few particles it’s not so much of a problem but if it’s not, then it’s not something that you factor in as they just absorb all your incident light.

The PTV turbidity instrument series is distributed by PMA in the UK. Tom Lendrem is Senior Sales Engineer for PMA with over 13 years experience in spectroscopy, colorimetry and turbidity measurement. Mike Sadar is R&D manager at Lovibond Tintometer.

Want to read more about the PTV Series?

Discover how Mike and his team designed the PTV Series. 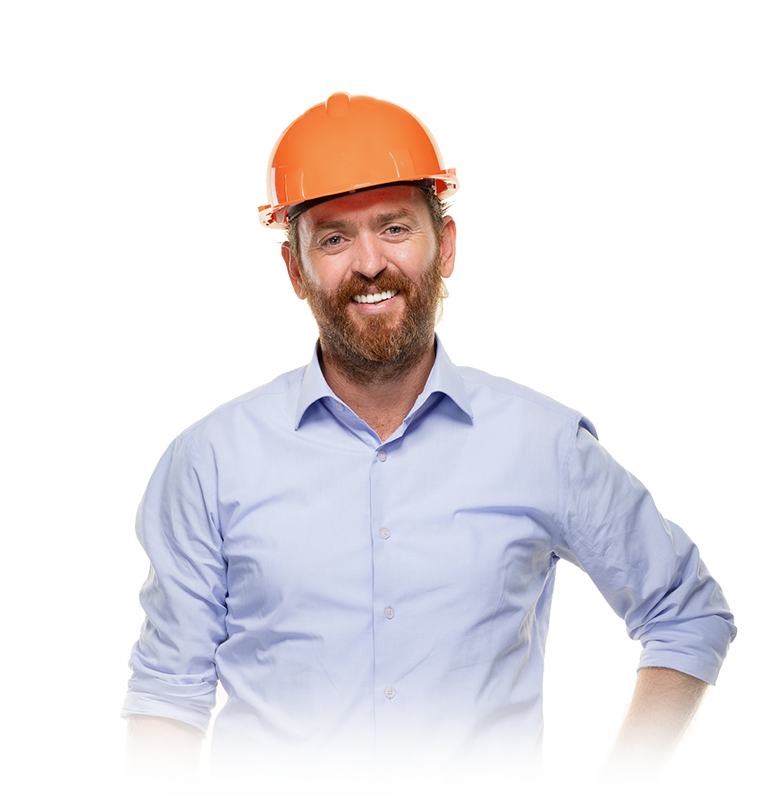 Head of Marketing & IT